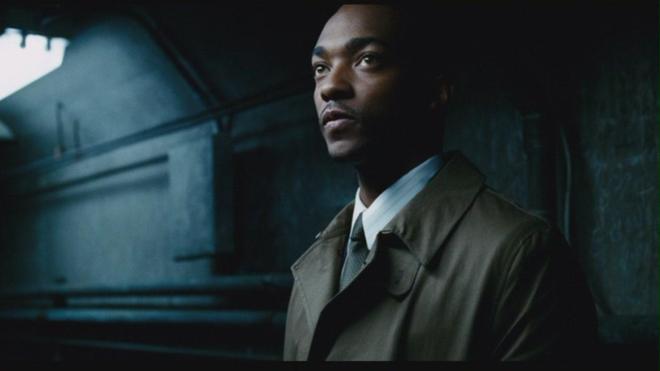 So in my imaginary alternative Avengers universe, Cap is black. Mainly because I think a black Captain America would A) be a better rebuttal to the Nazi ubermensch, but B) (much more importantly) would call the question on America’s own racism, past and present, in some very provocative and un-ignorable ways. To wit:

Think about the transformation scene in Doctor Erskine’s lab. With a black man on the table, that scene is no longer just about a daring volunteer patriot—now it carries echoes and resonances, calling up both the incredible heroism of the Tuskeegee Airmen… but also, underneath that, the Tuskeegee Syphilis studies conducted by the US government upon black bodies *at the same time*. Cap’s work selling war bonds is now not so much a let-down as an act of segregation, damn near a minstrel show—and his decision to go AWOL to rescue the Howling Commandos becomes a much more powerful and dangerous act of rebellion.

Essentially, I think a black Steve Rogers brings into much starker relief all the uncomfortable truths about all the ways America has failed to live up to its own ideals, and brought into the present time *would continue to do so*. And if I could cast him as anyone at all, it would be Anthony Mackie. I think he brings both strength and a wiry toughness that implies that he hasn’t always been strong. And that’s important.

I’m really excited to see him in Cap 2, and don’t get me wrong, Chris Evans is great. But in my head, they’ll secretly be switching roles.

Yes, all of this

I don’t know if the original poster is aware of this, but this is pretty much exactly the sentiment behind Isaiah Bradley, right down to the “forced recruitment.” 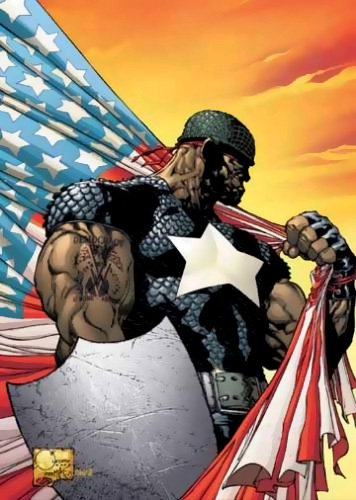 The whole storyline is pretty brutal, intentionally so. Isaiah’s origins are an explicit reference to the Tuskegee experiments, with three hundred African American soldiers being tested on in an attempt to recreate the effects of Erskine’s original super-soldier serum. Only five men live, and hundreds of others are executed by the US government to keep the experiments a secret. The government tells the families of the dead that those men had been “killed in action.”

Bradley is sent off to fight the Nazis, and is the last survivor of his testing group. Despite being a hero, he’s eventually court-martialed and imprisoned. He is pardoned, but tragically suffers from the effects of brain-damage later in life — a reference to Muhammad Ali.

Isaiah is well-known and revered among Black citizens in the Marvel universe, but less famous among non-Americans or non-Black Marvel denizens, a detail I find as nicely understated as it is scathing.

His grandson, Eli Bradley, is currently a member of the Young Avengers (a series worth exploring for anyone interested in broader racial and MOGAI representation in contemporary cape comics) under the superhero name Patriot.

Eli’s a young Black man in modern America, and he does not fuck around with the implications of his grandfather’s legacy, or the baggage of Captain America.

Here he is talking it over with Bucky. They are both v. adorable and make my heart leak a little bit:

And of course, Sam Wilson is the current Captain America in the 616 universe.

Yeah, neither of these events are exactly the same as the OP’s suggestion, but it is kinda nice that these characters and issues have not gone unaddressed in the comics.